Breckenridge, Colorado is known as an adorable ski town that’s especially popular as a family destination. It can also be pricey and crowded, especially during Spring Break season in March and on holiday weekends.

If you have a little flexibility in your schedule, consider coming to Breck in January for one of its exciting  winter festivals. Whether you drive up from Denver for a day or two, or schedule your ski vacation in January, the Ullr Fest and the International Snow Sculpture Championships both guarantee lots of fun. While January can be cold and sometimes the snowpack might not be as deep as you’d like, you won’t have to deal with the March crowds, prices or slushy snow and these unique events will make your visit even more special.

This tradition has been bringing people to Breckenridge every year since 1963 to celebrate the Norse God of snow and skiing. In 2019 the annual Ullr Fest will take place January 9 – 12.

Highlights of the festival include the “Shot Ski,” in which over a thousand Ullr-worshippers do a shot off the world’s longest ski. If you are over 21 and want to participate, register early because this event sells out quickly!

After the Shot Ski, cheer on the Ullr Parade on Main Street. This is a very “local” and rowdy parade, kind of like a small town Mardi Gras parade with candy thrown to the crowds from amateur floats and trucks. There’s nothing like watching adults scramble to snatch Smarties, Starbursts, and Lollipops off the ground! Watch the local kids do a ski jump on the back of a truck in the middle of the street and the men-who-have-no-sense parade shirtless despite January temps.

Immediately after the parade, head to the nearby parking lot where a massive pile of old Christmas trees waits to be thrown onto Breckenridge’s biggest bonfire. By this time your toes and nose may be almost froze, so get a good spot up front and let the bonfire thaw you out. The crowd is friendly and boisterous as the fire is stoked with trees and the sun fades. 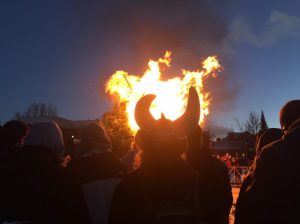 Note: The shot ski, parade and bonfire take place on a Thursday, starting mid-afternoon, so if you want to make a run up from Denver you’ll have to take the afternoon off work and head up by noon.

While there is a small charge to participate in the Shot Ski, other events like the parade and bonfire are free! Free parking is available by the gondola in town and the crowds aren’t too bad.

At the end of January Breckenridge hosts the International Snow Sculpture Championships. The event kicks off with teams carving sculptures over several days and then the crowds from the front range flood into town to view the finished sculptures. Visitors can vote for their favorite sculpture to win the People’s Choice award.

Sculpting teams come from around the world (Argentina, China, India, Mongolia, and various U.S. states) and the sculptures represent the wide range of cultures. Children especially love seeing these magical creations, and there is a snow fort they can play in.

Unlike the Ullr Fest, which has several different events spread over a few days, the Snow Sculptures are just that – a chance to view snow sculptures. While they are impressive, it will take you about 30 – 45 minutes to see the sculptures and take all the photos you want. I’d recommend making this something to do along with skiing/shredding or some other activity like nordic skiing, snowshoeing or sledding in the area.

The downside of visiting Breckenridge for the Snow Sculpture Championships is that it is increasingly popular. In 2018 the weekend drive to and from Breckenridge was at least twice as long as it should be, even from other Summit County towns. Parking and traffic are a challenge, so allow time to park in the lots north of town on Airport Road and take the bus to the Snow Sculpture viewing area.

The good news is that the parking north of town is located near the Breckenridge Distillery, Broken Compass Brewing, three cannabis stores, and my new discovery, The Hangar, which is a great local bar serving delicious food.

My recommendation: Come on Friday or Monday instead of the weekend. Or come earlier in the week to see the sculptures being carved. After spending 2 hours in traffic trying to find a parking spot on a Saturday (to meet friends coming up from Denver), we gave up on seeing the sculptures and just enjoyed hanging out at The Hangar. We returned on Monday to ski and had no trouble with traffic or parking, aand were able to see the sculptures after a few runs.

I’ll update this article with more details about the 2019 festivals as information becomes available. Check back in the autumn.